Great Moments in Nudging with the Gun

This is just too much fun.

A new federal regulation issued on Wednesday will reveal publicly the workplace injuries and illnesses employers have typically logged for their private use, triggering a clash with business groups that say the data could be misconstrued and exploited by unions and plaintiffs’ lawyers.

A little background. When Other Guys get hurt or sick on the job, most companies (typically with 10 or more employees) are required to complete a form and give it to OSHA, the Occupational Safety and Health Agency. OSHA collates all this information and uses it to enforce laws and regulations and also to conduct investigations and research. While working at NIOSH, I often had interactions with OSHA regulators and that database as we developed persuasion campaigns for employers and employees about sudden increases in workplace mortality or morbidity or discovered new causes for old problems. Since I worked with NIOSH, a research agency, I typically had good relationships with both sides, but OSHA tended to have adversarial conflicts with the business side.

And, that adversarial element, I think, is driving this latest regulatory stick-in-the-eye from the Obama Administration in its last year of operation. The new regulation is only old regulation that’s been in force since OSHA arrived on the scene in 1970. What’s new about it is one apparent iSmart wrinkle: OSHA will now put all the reports online.

At first take, this sounds like the Fed is finally joining the 3rd Millennium and putting information online aiding the public’s right to know. Good grief. Companies already report the information. OSHA already has it. Everyone has some kind of computer and network. Why not put the reports online for public view? Better still, there’s a good persuasion reason for doing this according to OSHA (pdf).

OSHA believes that disclosure of and public access to these data will (using the word commonly used in the behavioral sciences literature) “nudge” some employers to abate hazards and thereby prevent workplace injuries and illnesses, without OSHA having to conduct onsite inspections (see the book Nudge: Improving Decisions About Health, Wealth, and Happiness, by Richard H. Thaler and Cass R. Sunstein (Penguin Books, 2009)).

If you heard a shout of laughter on Sunday, May 15, 2016 around 1pm Eastern, that was me reading that OSHA document promulgating the new regulation. Nudge!?!

That one word tells you about all the persuasion and revenge and conflict you need to know. Nudge!?!

2. Putting this data online for public access is not a Nudge. Nudge is choice architecture, a fancy way of saying that you mess around with the arrangement, timing, availability, location, and number of options the Other Guys has. For example, put “good” food in easy to reach location and put “bad” food in the basement with bad lighting, squeaky stairs, and strange smells. Or, set the “good” choice as the automatic default as with payroll savings deductions and require the Other Guy to exert some effort to kill the default and pick something else. Choice architecture. There is no choice architecture in a public database of information.

3. This, however, still is a persuasion play called Nudging With A Gun. The information OSHA requires is not enough for any observer to understand and draw conclusions. I’ve read these things and they provide a bare bones description of the event. I’ve poured over a stack of them with regulators trying to discern some kind of pattern or trigger or mistake and most of the time there isn’t one. You could focus more on the actual Other Guys, their behaviors, and how that kills or injures them. Or you can spend a billion dollars on a Beltway Bandit who will take all the paper records from the past, convert them to digital, and even build the website. I’ll bet the guys who did HealthCare.gov are available!

I’ve heaped scorn on Nudge since it was published as bad science that produces worse persuasion and we see yet another example of that with this. Justifying public posting of incomplete, misleading, and scary information with a pop press book demonstrates the pettiness of yet another Fed agency in the last year of its President. All the political appointees in the various Executive Branch units are scurrying around looking for anything they can do to stick it their political enemies, all in the name of making the world a better place. With Nudge!

Good grief. I’ll take the Gangs of New York over this silliness anytime. At least Bill the Butcher was sincere and competent in both his politics and his persuasion (YouTube). 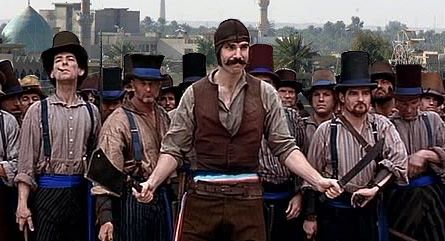 P.S. I guess the Crucifixion Persuasion Play™ is no longer an option for Feds.