It Ain’t the Weight; It’s the Discrimination

Fat kills! Two ways! First, dietary fat kills! Second, getting fat (as in overweight) kills! We know the first truth is false. How about the second?

Consider this double set observational study. Researchers dug deep into two different longitudinal studies of life and death, the Health and Retirement Study (HRS) and Midlife in the United States (MIDUS). As observational studies, the HRS and MIDUS are done about as well as you can do, but neither begin with random sample, just large and representative samples which is never the same thing as random, but about as good as it gets with the problem (right, you cannot randomly assign babies to lifestyle and experience). The main focus of this research is to investigate the relationship between self-perceived weight discrimination and mortality.

As part of the on-going surveying of these two large groups of Other Guys, they answered questions regarding perceived discrimination. Specifically,

In the HRS, participants could attribute unfair treatment (yes/no) to one or more characteristics, including ancestry or national origin, gender, race, age, weight, a physical disability, appearance, or sexual orientation. The attributions were similar in the MIDUS questionnaire, except that one option inquired about height or weight rather than weight only, and another option asked about ethnicity or nationality rather than ancestry or national origin. Participants could choose as many or as few attributions as necessary.

While this is a simple way to measure discrimination, it is a tricky way to do it. A simple yes/no response on one item lacks reliability and owns questionable validity. Sure, the question is obvious: Have you been discriminated against because of your sexual orientation (Yes or No). But the frequency of the act of discrimination is missing as is any coherent definition of what constitutes discrimination. Assault? Bad service? Dirty looks? Name calling? As with all persuasion, It Depends on the Local, which is great when you are doing persuasion, but for doing science? So, the measure of discrimination ain’t the greatest and misses complexity. But, that’s how the MIDUS and HRS studies were designed, so that’s what we use to determine the effect of discrimination on mortality.

We will now look at two rather simple appearing, but seriously complex, tables of results from the HRS and MIDUS data. The researchers built 3 regression models to test discrimination effects. Model 1 begins with demographic adjustments and then the discrimination scores. Model 2 adds BMI to show the morality effects for actual weight. Model 3 adds a variety of lifestyle and disease burden (smoking, for example) factors. The purpose of these models is to see if you can zero out any discrimination effects. Each element in the table is simple, but analyzing them all is complicated. Here we go. First with the HRS data. 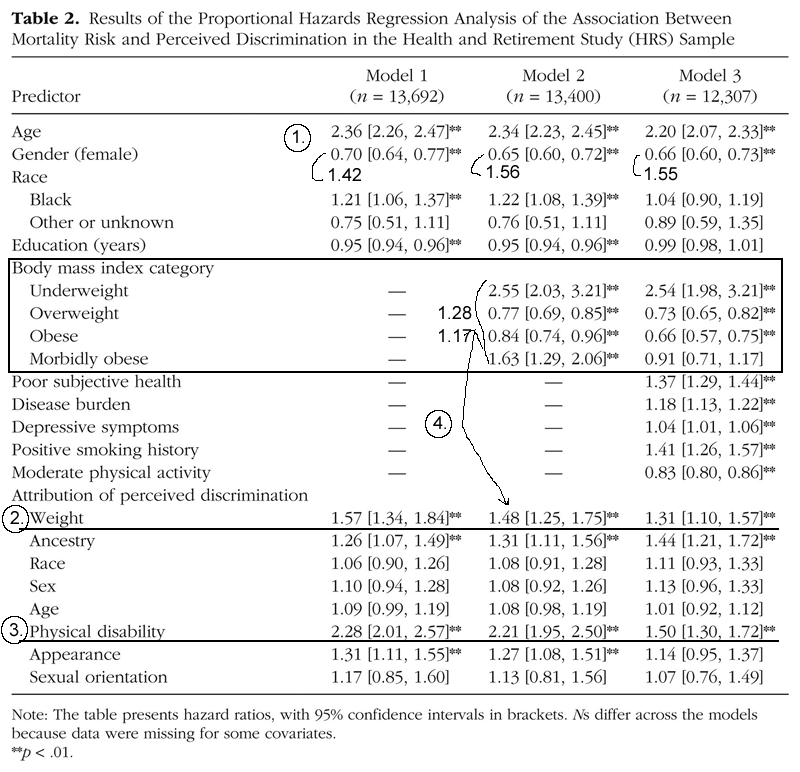 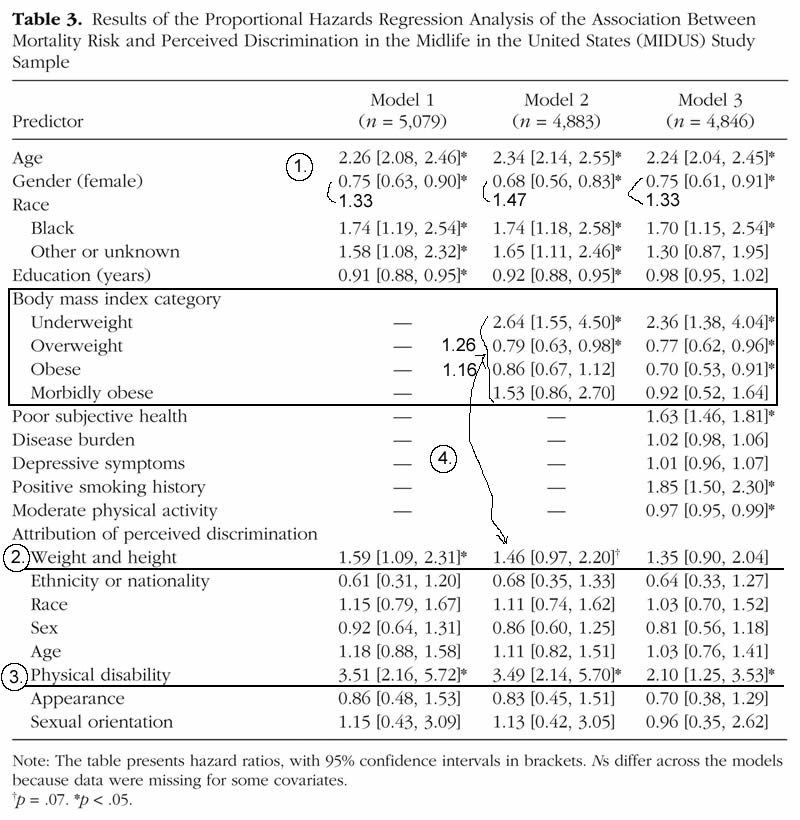 I’ve circled four numbered highlights that focus our look. I also converted some of the ratios so that the number is higher rather than lower to help with the Windowpane interpretation (the sex ratio and the BMI ratios). Let’s take them in numbered order.

1. At the top of both tables you see the familiar finding that as Other Guys get older they are more likely to die (Medium Windowpane) and that male Other Guys tend to die sooner than females (Small Windowpane). Thus, these nonrandom, but representative, samples are very similar with the age and sex findings from other such datasets. And, notice that the ratios don’t change much across the three models. Age and sex do what they do.

2. Scan down to the bottom of the tables and you see the effect for weight discrimination. A Small Windowpane. When Other Guys think people discriminate against them because of their weight, they are more likely to die, albeit at a Small effect, about 45/55. Notice, too, that even with adjustments for demographics AND for BMI in Model 2, the effect still holds. That simple Yes/No response to the weight discrimination question produces a true Small Windowpane.

3. Scan down farther to the physical disability discrimination line. That’s a Medium Windowpane, about a 35/65 difference. That’s the same size as age! And, look at the other much more famous discrimination variables (race, sex, sexual orientation) and observe very Small, trivial Windowpanes.

4. Now we get to the interesting results. Look at the box for BMI in each table. First, what you don’t see is a line for normal weight BMI people – that’s the reference group to which the other categories are compared. Please note that the Underweight BMI category is a Medium Windowpane and the Morbidly Obese (BMI over 40) is Small! Furthermore realize that Overweight and Obese categories actually live longer than “good” weight Other Guys. I reversed the ratios just to the left to help with the Windowpane designation. You see very Small advantages to Overweight or Obese, but they are better than for normal weight people. Chew on that a moment. Other Guys with BMI’s between 25 and 40 who are generally nagged at as Fat actually live longer than OGs with “good” BMIs between 20-25 and obviously better than severely under or overweight people. Stated another way: Obesity saves!

The researchers do not observe or comment on this directly, but when you look at these tables and think about the data, you see that physical weight (BMI between 18.5 and 40) may have less impact on mortality than perceived weight discrimination! You also see a true U shaped mortality curve for BMI with severely underweight or overweight forming the top of the U and normal, overweight, and obese forming the bottom of the U. These data directly contradict the dogma that overweight (BMI 25-39) is especially dangerous.

The researchers also do not report a test of association between BMI and weight discrimination so I contacted the lead author who, with great patience, explained that they looked at that and did find a correlation. People did report more discrimination as their BMI increased. She did not share the association in detail, so I assume it is at least a Small Windowpane, maybe more.

I hope you understand my persuasion confusion with these data. Yep, they do show the mortality effect for weight discrimination. And they also show that perceived discrimination for physical disability is as harmful as Age (!!!) and clearly stronger than weight discrimination. And, the data also show that weight discrimation impact on mortality is greater than the attributes that receive considerably more social sanction: Race, sex, sexual orientation. These data would suggest we need to refocus persuasion efforts on factors like physical disability and weight since they have obviously larger Windowpanes.

I’m not saying we can only choose one or two factors regarding discrimination, but you see that persuasion is driving much of our social messaging on discrimination. When you look at the science, you see that weight and especially physical disability discrimination are more deadly to Other Guys, at least with these two independent datasets.

What also engages my attention is that true U shaped mortality curve for BMI. Only at the extremes at both ends of the continuum do you see strong mortality effects and even more attention-getting is the fact that severe underweight is more deadly than even severe overweight. These data indicate that the BMI range from roughly 19 to 39 produces very similar mortality outcome and if you get purely statistical about it, the “good” range of 19-25 BMI produces slightly higher mortality than does overweight.

Yet, as a society we are spending time and treasure on persuasion against overweight when we are finding more and more data like the HRS and MIDUS datasets that directly contradict this assertion. I’ll leave it as an exercise for you, but read research reports that claim overweight (BMI between 25-39) kills then note all the adjusting machinations needed to make that claim. See in the HRS and MIDUS data sets when you only adjust for age, sex, and discrimination variables, you get a very different take on the impact of BMI.

See the application of the persuasion Rule that All Persuasion Is Strategic. You don’t persuade just to change one TACT, but to accomplish larger goals, just as armies don’t fight battles to win battles, but to win wars. A lot of Tooth Fairies have been fighting the overweight TACT; these data strongly suggest that they are fighting battles to win battles that will not win a war of any importance.

First, the psychological variable of weight discrimination shows a greater effect on mortality at the population level than does actual weight as measured by BMI. You need to dig a little deeper here because the numbers count.

Thus, weight is truly dangerous to about 10% of the population at either extreme of the spectrum. The 90% in between show virtually no relationship with early death. But, perceived discrimination arises now and shows consistent, if Small, evidence that it is more deadly than mere overweight. Thus, if you were the National Persuasion Czar, you could produce more impact on national death rates if you focused persuasion on discrimation based on weight (and physical disability) than all the Fat Kills!!! screeching that has raged the past 20 or 30 years.

Second, see the implication here from the Rule about strategic persuasion. Just what war are you trying to win? You can and will find Tooth Fairy Tales that adjust and trim BMI to make it look like Other Guys with the spare tire are killing themselves when you see in two different datasets, HRS and MIDUS, the story is much simpler. I’d argue from these and other data, that we have been fighting the wrong battles and will never win the war of making More Life.

Third, I need to strongly underscore that I am taking these data and analyzing them very differently than the researchers. They are focused like a laser on the discrimination effects and do not comment on all the BMI ruckus I’m raising.

Finally: All Persuasion Is Strategic. If you want to make the world a better place by increasing longevity, these two datasets suggest you should shut up about “normal” overweight (BMI 25-39) and start playing on weight discrimination. Of course, if you want to make your world a better place, hyping “normal” overweight appears to be the battle you fight to win the war of tenure, promotion, grants, Times quotations, and a nice job with no heavy lifting.