The Skinner Box is the name for the application of operant conditioning to your Local and aimed at getting Other Guys to hit the TACTs you want. When you design and implement a Skinner Box correctly, it opens some of the Largest and most obvious Windowpanes on change you can find. Just manage the When-Do-Get sequence and you will count a lot of change. Like with classroom management of these kids. 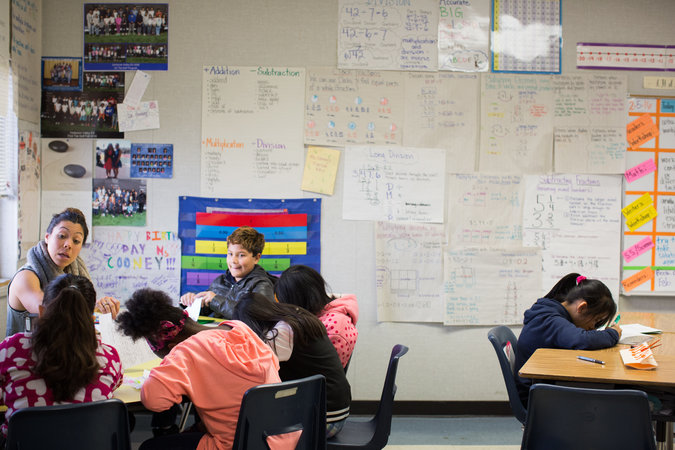 Just two years ago in her classroom in a trailer here at Visitacion Valley Elementary School, Ms. Cooney struggled with the kind of management problems that often confront young teachers.

Her students, mostly poor and living in a nearby housing project, were bouncing around the classroom, playing with their phones instead of paying attention, fighting out interfamily beefs. Even if they wanted to learn, they were not.

Ms. Cooney, 27, took a two-hour training session in a student-behavior program and began playing “good-behavior games.” They look like regular lessons, except that they begin with students identifying goals for good behavior, and end with her assessing what went right and wrong.

On a recent day, students took notes on their reading as Ms. Cooney moved with a kind of Zen bustle around the classroom, grading papers and consulting one-on-one while she watched for things she would compliment the class on later — keeping bodies still, focusing on the task — and quietly noted bad behavior.
For every 1,000 minutes of good behavior earned, the children win 15 extra minutes of recess.

“I’m really saving minutes that would be lost to transitions, settling disputes and behavior problems,” Ms. Cooney said. It can be exhausting, but not nearly as much as teaching before. As she said, “Would you rather put out fires, or prevent them?”

You see all the persuasion elements in this example. The Local is nicely contained within the walls of a classroom. You know exactly who are the Other Guys. You have considerable persuasion resource about what you do, when, with whom, how often. And, you see the obvious Skinner Box teacher Cooney built. When we are learning, Do perform the correct academic behaviors, Get more recess time.

This is exactly how I used to teach the Skinner Box in an off-campus teacher education program in instructional communication. I’d have the teachers identify the TACTs – those ideal academic and classroom behaviors – then we’d brainstorm how to write simple When-Do-Get rules and how to implement the Skinner Box. And, when you do it right, it works. This is just Good Teaching 101. What could go wrong?

A recent update to federal education law requires states to include at least one nonacademic measure in judging school performance. So other states are watching these districts as a potential model. But the race to test for so-called social-emotional skills has raised alarms even among the biggest proponents of teaching them, who warn that the definitions are unclear and the tests faulty.

Require building and testing national Skinner Boxes on these non-academic TACTs! Gee. How can that be bad? Think about it.

Begin with the Rule: All Persuasion is Local. Or stated another way, It Depends. You cannot possibly design a Skinner Box or any persuasion play that operates exactly the same way and produces exactly the same effect in all Locals. You’ve got to have a lot of Local insight and consideration. So, just defining a Skinner Box regardless of the TACT it aims at the national level is just plain foolish.

Now, what’s the TACT and how do you define it? With Ms. Cooney, she looked at her Local and appeared to execute a smart behavior analysis that watched the ecology of the kids and how they reacted to each other, to her, and to learning. She selected a few key behaviors, defined the When-Do-Gets, then watched what happened. While the Times article does not state this, I strongly suspect that she modified the TACTs. The Skinner Box nailed some TACTs which had the amazing effect of changing other TACTs without running them in the Box. So, she adapted the TACTs. And, with next year’s kids, she’ll modify them again.

At a national or even state level, trying to define TACTs, especially the non-academic TACTs like conscientiousness, focus, self control, WATTage, and so on, while you could probably create good abstract definitions, the problem here is you need to define operational definitions. Let’s go Wiki on self control.

Self-control, an aspect of inhibitory control, is the ability to control one’s emotions and behavior in the face of temptations and impulses.

That’s entirely consistent with the research literature and how self control is defined. But, that’s not an operational definition. That requires a concrete observable and countable manifestation of the concept. For example.

A hungry child will demonstrate self control by sitting in front of a table with desired treats for at least 2 minutes without eating a treat while being observed by a test administrator.

A child will demonstrate conscientiousness by completing a paper assignment within five minutes on ten skill level math problems working alone and without talking to or gesturing to others while being observed by a test administrator.

No national or state committee of experts, parents, and political appointees will be able to produce TACT statements like that. Instead they will default to abstract definitions that permit wide and wild variation in operationalization.

While I know that this kind of behavioral persuasion on nonacademic TACTs like WATTage and self control does work, making it work as part of a national policy is ludicrous on the face of it. No group can produce the clarity needed to create a policy that can be universally implemented and reliably measured. The problem here is not with the persuasion or the TACTs, but with the distance between the people writing the policy and the people implementing the policy.

Hey, remember the HealthCare.gov website fiasco? That is an example of exactly this problem. Top level guys like President Obama and Secretary Sebelius (and their staffs) wrote the policy which had to be implemented at a much lower level. I know that my branch at NIOSH could have gotten an assignment related to doing something on HealthCare.gov and my people would have been charged with designing interfaces or graphics, testing usability, and – this is the big one – hiring contractors to actually build stuff that we’d then evaluate and implement. And, from my experience with Presidents from both sides of the aisle, I know that I would have received virtually no contact or guidance even when I was shouting for clarification. Government committees do not operate like that. Instead they play like Pharaoh in Exodus at least in the movie version.

Other Guys who try to do persuasion always want to cut to the chase and immediately run a play. They don’t want to commit the WATTage needed for all the analysis and planning that precedes a play. You see that persuasion failure in this example. Ms. Cooney is doing this exactly right because she’s in her Local with her analysis and her observation of how the Skinner Box operates.

The problem here is when people who don’t work the specific Local start writing problem statements with their imagined solutions. If you’ve worked in a large enough organization where persuasion operations get invented in the Head Shed, then handed down through a couple of layers of administration for you to implement, you know exactly what I’m talking about.

Those who propose must also dispose!